Attention left-handed traffic, this is important for the participants of Reuthers Motorcycle Tours through Australia. The Australia Road Trip starts with the Great Ocean Road. Officially designated as a Scenic Route along the coast, it is a declared biker's paradise, as it is both historically and culturally important, and fantastically beautiful to drive. Also on the route is the Split Point Lighthouse on the Eagle Rock and the famous Twelve Apostles.

Bye, bye coast and Hello Wild West is the theme for the next day. According to historical tradition one of Australia's largest gold nuggets was found in Ballarat in1858. Sovereign Hills today is a reconstructed gold mining town, where actors’ show tourists how people lived in the time of the gold rush. By the way: It could be that there are gold deposits because just recently in 2013 it is said that gold was found in the town.

A unique Australia Round Trip by Water?!

The motorcycle riders are allowed to leave their saddle for a longer time while in Echuca. The Paddlesteamer Emmylou lies in the historic port town and takes the participants of the Reuthers tour on a trip on the Murray River. The river itself is over 2000 kilometers long and originates in the Snowy Mountains. The name of the city of Echuca, where the river cruise starts is connected to the water. If one follows the translation of the Aborigines, Echuca stands for the meeting of the rivers. And you can see that, because in the city the Goulburn River and the Campaspe River flow into the Murray River.

Our 12 day roadtrip Down Under leads you to Sydney, Melbourne and the Great Ocean Road. Also bookable for passengers in an escort vehicle.

After this test - seeing if all participants are suitable for a trip on the water - it's off to the big Pacific. Here awaits for the bikers an evening harbor cruise before the coast of Sydney. Of course the first association with the city is the Opera House that is both an architectural highlight and a UNESCO World Cultural Heritage Site. But the metropolis also has even more recreational opportunities to offer.

On a Australia Round Trip with a visit to Tasmania

It gets typically Australian on the Down Under Tour, but a part of the country is missing: a visit to the island Tasmania and the same named state. There, the secret of the Tasmanian Devil is aired. Known through cartoon series the tramp actually exists. The carnivores roam every night for several kilometers through Australia and help themselves in nature. Reason enough to book the Best of Tour. 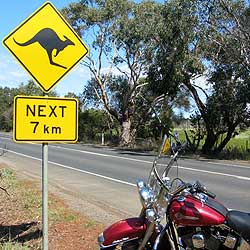 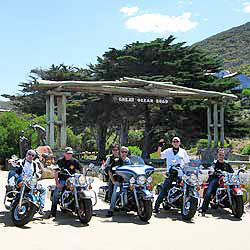