What do the Twelve Apostles and the London Bridge have in common with Australia? In the figurative sense quite a lot, for they are typical Australian photo motives. The Twelve Apostles are rock formations made out of limestone. They belong to the Port-Campbell-National Park and are a highlight of the Great Ocean Road on which the Reuthers tour participants start their photo trip.

In the past, the rock formations had a far less biblical name. A historic card show them as “The Sow and the Pigs". Tip: Counting is useless. Already in the middle of the 20th century there were only nine rocks left. Since 2005 a further rock yielded because of the natural erosion. So the Twelve Apostles consist today of eight rocks.

The second big photo highlight on the stretch - the London Bridge - is also found in the same national park. Yet here nature also interfered. Up until 1990, the rock formation could still be photographed with two arches. Through natural erosion they collapsed - and were consequently renamed to London Arch. 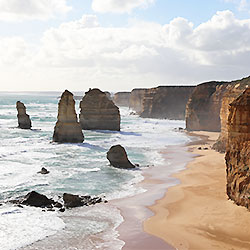 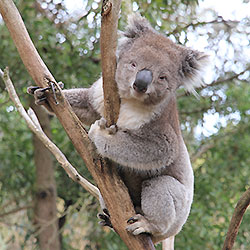 Experience World Cities on an Australia Round Trip

Yet that is only a fraction of the dream trip... On the Photo Tours through Australia both hobby photographers and pro photographers get their money’s worth. Granted, maybe one or the other night is a bit short due to the fact that the motif is at sunrise or sunset even more diverse in bright light and it seems to be a typical postcard view, but it's worth it.

Not only does Australia have nature highlights but of course also gorgeous cities, that invite the participants of the Reuthers Photo Tour to explore them. For example the capital of Australia, Canberra is on the tour plan. Why Canberra? The city is probably a well-planned compromise solution - and made the rivalry between Sydney and Melbourne come to an end. But the sights in Sydney and Melbourne will also end up in front of the lens of the participants of the Reuthers Photo Tour.