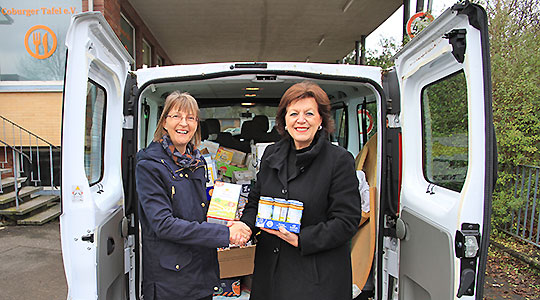 An exciting anniversary year is coming to an end for REUTHER-ENTERTAINMENTS - in 2017, the service company celebrated its 30th anniversary. This called for an anniversary tour of the special kind and so in June 2017 the trip went from Berlin to Moscow and back again on Harley-Davidson and BMW motorcycles. This of course was also for a good purpose, because per participant 100 Euros were donated to the "Reuthers Children Charity". At the Welcome Dinner in Berlin, the founder and chairman of the "Reuthers Children Charity", Adelheid Reuther, thanked the participants very warmly.

Organic food and products for babies and toddlers

After intensive research and consideration, the decision was made for "Who" and for "What" this year's donation of the "Reuthers Children Charity" will go to. Hermann Reuther notes: "Unfortunately, there are more and more families with children in Germany who lack the most important basics and in this need the Food Banks help nationwide. We would like to take this opportunity to say a Big Thank You and compliment to the many volunteers and the companies that regularly provide the Food Banks with donations." "On December 6, 2017, we therefore donated to the Coburger Tafel e. V. organic food and goods - exclusively for babies and toddlers -" says Adelheid Reuther.

In 1998, the wife of company founder Hermann Reuther launched the "Reuthers Children Charity" - at that time still called "Cally Kinderhilfe" - and since then the Coburger Tafel, the Berlin Emergency Service Child Protection, the Takarunga Playcentre Devonport in New Zealand and many other organizations were supported. "The focus of our social commitment lies in supporting already existing charity projects for children," explains Adelheid Reuther. There are no office or administrative costs for the worthy cause, so every donation is passed on 1:1 to recognized charity projects. The focus is placed on donations in kind instead of cash donations and the proper use is checked by Adelheid Reuther personally.