Reuthers and Harley-Davidson – this is a success story that seeks its own for the past several years, because what does a true Harley-Davidson fan need more than lovingly designed Reuthers Tours to dream destinations in the world? Of course something for the little hunger during the tour. And this is exactly where JACK LINK'S comes into play. 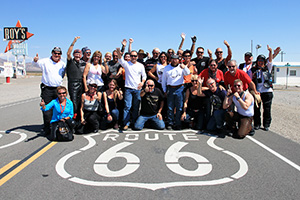 The US-based company produces durable meat snacks that are characterized by delicious flavors. The dried meat snacks made of beef and Beef Jerky spiced with pepper, teriyaki or sweet and spicy - are truly addictive. What the fans appreciate most about the meat snacks are the low fat and good protein content. So JACK LINK'S adds the snack which should be in the luggage on every Harley-Davidson Tour.

Reason enough for the company based in Wisconsin and Berlin to give away three Reuthers dream trips. And this is how it works: Anyone who registers by February 28, 2015 > here automatically wanders into the lottery wheel. What can be won? Three two-week Reuthers Harley-Davidson Dream Tours on the famous Route 66.

Family Link and the American meat industry - this successful duo has been around since the end of the 19th century. The current company JACK LINK'S, however, was founded in 1986 in Wisconsin. By setting up a European office in Berlin in 2008, the company has paved their way to success in the European market. Currently the meat snacks are sold in about 40 countries.

And the portfolio, which has long focused on its main product Beef Jerky, is growing rapidly. There is now a turkey snack and a flavor variant with pepper. And the business is growing: Since 2014, the German brand Bifi belongs to the company portfolio.

About the Reuthers Harley-Davidson Route 66 Tours

Eight states in only two weeks – this is on the tour plan of the Reuthers Harley-Davidson Route 66 Tours. Starting point is Chicago. The historic Route 66, the first paved road to the West Coast of the United States enjoyed great popularity in the early 20th century and stands for the American sense of freedom and adventure. And the participants of the Reuthers Harley-Davidson Route 66 Tours experience this in any case.

Those who want to double their good fortune, can participate also in the "Win Your Dream Tour" sweepstakes. Anyone who books in 2014 a Reuthers Tour can win this Dream Tour because per 100 participants Reuthers draws a Harley-Davidson dream trip. Taking part is definitely worthwhile!