War cries and Love songs:
With a motorcycle to the Maori in New Zealand

Painted and tattooed men are dancing around. They are sticking out their tongues and singing their songs - or should one say, they are howling? The ritual greeting of the Maori the natives of New Zealand, is originally a war dance. This is how the cultural evening begins at Tamaki Village in Rotorua. „For me this is the original, of course it’s made for the tourists, but in a loving way“, says Hermann Reuther, founder and president of REUTHER-ENTERTAINMENTS. He offers as an Authorized Harley-Davidson Tour Operator worldwide tours, but he is especially fond of New Zealand. For several years he lived with his family on the island that has many things to offer. 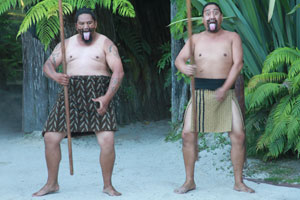 For centuries the Maori have been living with their songs, rites and customs on the island. And on the cultural evening they show the guests much more than just their war cry. Later in the evening there is joyful dancing and love songs are sung. Of course there is also traditional food. As thousands years ago the Hangi dinner is prepared in holes in the ground. First stones are heated in the fire, which are then stacked together with the ingredients in the ground. "You’ll find everything in it," says Reuther, "from sweet potatoes to vegetables, chicken, fish or lamb." The food is cooked for hours on hot stones. The cultural evening at the Maori is just one of the many highlights on the 19-day "Paradise" trip. "I visit the village three times a year and every time it's different " Reuther enthuses about the natural ways and the creativity of the Maori. Later during the trip, the Maori will continue to play a role. For example, at the northernmost point of the island, at Cape Reinga. There, so is the belief, is where the departed souls glide into the water and down into the underworld of "Aotearoa". This is the name given by the Maori to New Zealand. Translated it means "Land of the Long White Cloud".

Four million people live in New Zealand, which measures about three-quarters of the size of Germany. The vast landscapes and empty roads are a paradise for motorcyclists. The travelers cruise on Harley-Davidsons along coastal roads. On one side driving past the clear blue Pacific with white sandy beaches - on the other side are the mountains. Passing by steaming geysers, roaming through rain forests and snow-capped peaks radiate across the country.

"We want our customers to focus entirely on the landscape and on motorcycling," says Reuther. Therefore he has developed three models how his guests can travel across the island. Guided tours are usually with six to twelve participants and are offered several times a year. For smaller groups Reuthers Motorcycle Tours organizes tours on the desired dates. And for individuals, he has developed the "Navi Guided Tour" which also has been patented.Each guest receives a programmed navigation device in which each day is pre-planned with the route, sights and events.

The concept is not limited to Reuthers New Zealand Travel, but it is also available for tours in America, Africa, Australia or Europe. And for those who do not want to take the tour on a rented Harley they can bring their own bike - or experience the trip in the escort vehicle, minibus or rental car. Pictures and film impressions and a lot of information of the people and places are available on the website http://reuthers.com