Ride a Harley Davidson on the Route 66:
The Reuthers Anniversary Tour with Wolfgang Fierek in the online sweepstakes

For the 25th company anniversary Reuthers Motorcycle Tours, the market leader for demanding worldwide motorcycle trips, will be organizing for July 2012 a special highlight: The famous Route 66 as a guided trip with Wolfgang Fierek. The well known actor and motorcycle fan will, as a special guest, accompany the unforgettable adventure trip on the legendary Highway – in style with the participants on a Harley Davidson. 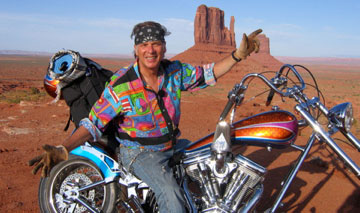 Together with Wolfgang Fierek on the „Highway of Dreams“

No other highway raises such longings as the Route 66, the first non-stop connection between the East Coast city of Chicago and the gigantic city on the Pacific coast, Los Angeles. Company founder and President Hermann Reuther explains: "Our motto is: ' We sell more than just trips - we fulfill your dreams! So what could be more fitting than to offer a dream vacation riding a motorcycle on the 'Highway of Dreams' for our 25th anniversary?” Reuther is especially happy about special guest Wolfgang Fierek. The sympathetic actor and singer, like Reuther, is a self-confessed motorcycle enthusiast and will accompany together with the company founder the participants on the anniversary trip. „The best part of motorcycling is being in a group of friends" Fierek raves in a video on: http://reuthers.com/motorcycle-tours.html and he is looking forward to an unforgettable trip.

In 16 days and a little more than 6.000 kilometers and eleven states the legendary route leads straight through the North American continent. Between Chicago and the Pacific, numerous superlative highlights await the riders, impressive landscape panoramas and nature spectacles alternate with many sightseeing offers. A VIP trip to the Harley Davidson Museum in the motorcycle world capital Milwaukee is part of it, as well as the famous Meramec Caverns - limestone caves in which once the outlaw Jesse James hid-, the fossil forest of the "Petrified Forest National Park ", the Monument Valley, the desert region of New Mexico and Nevada, the second largest dam of the world or the glamorous cities of Las Vegas and Los Angeles. The professionals of Reuthers Motorcycle Tours have had the Route 66 tour as one of their classics since 13 years in their program and have put together a perfect trip, including the best cafés, restaurants and clubs along the famous "Mother Road" - Video-impressions of the tour can be seen by video at
http://reuthers.com/video-route66.html

In the big anniversary sweepstakes Reuthers-Fans can win the anniversary trip with a value of 7.000 USD at: http://reuthers.com/sweepstakes.html. Since April 2010 Reuthers World of Entertainment chooses every month amongst their Twitter-Followers and Facebook fans two winners who will be in the final draw for the first prize April 2012. Each monthly winner receives in addition valuable vouchers for Reuthers Travel. Simply sign up under: http://twitter.com/reuthers and become a follower or under: http://www.facebook.com/reuthers you can sign up as a fan and receive the latest news of Reuthers World of Entertainment – and additionally increase your chance of winning every month. For those who don’t want to get on a motorcycle, the adventure trip can also be booked as a Reuthers Partner Vacation Program© and travel in an escort vehicle.

Best known from the film classic by the same name with Jack Nicholson and Morgan Freeman the ' Bucket List ' has the essence of all the dreams one would like to realize in their life. Ride the Route 66 on a Harley Davidson, travel to the paradise of New Zealand or visit the Mount Everest base camp - Company founder Hermann Reuther has taken many of his individual dreams into the versatile program of Reuthers World of Enjoyment. With his credo of: "Experience joy and pass it on - we personally dedicate ourselves in fulfilling your dreams and wishes" Reuther has made this the duty of his company which offers in the area of entertainment, leisure and travelling, a maximum of professionalism. In the almost 25 year company history the Reuthers community has grown together with the sympathetic entrepreneur to become a loyal fan base that enjoys a common experience of life. In the Live Chat at: http://reuthers.com/travel.html and under the national service hotlines you receive answers to all your questions quickly and competently. Fans can communicate on Twitter and Facebook even more directly and are always informed about all the latest news from the Reuthers World of Enjoyment.

REUTHER-ENTERTAINMENTS with the brand Reuthers is a service-group that is active worldwide in the area of entertainment, leisure and travelling with branches in Germany, the USA, New Zealand as well as worldwide representatives. Since the founding in 1987 a team of specialists take special care of the details and the wishes of the customers - see our highlights from over 20 years of events and travelling worldwide at: http://reuthers.com/highlights-d.html . Founder and President Hermann Reuther proudly states that he can look back on over 30 years of experience in the organizing of events - which he has learnt from the very basics. His credo is: " Experience joy and pass it on - we personally dedicate ourselves in fulfilling your dreams and wishes " – from company incentives to the clown Dodo at a children's birthday party, the world star at the press ball, worldwide product introduction up to the culinary party, the dream vacation to New Zealand or the adventure trip on a motorcycle to Tibet which is the newest highlight in the program of the Reuthers Motorcycle Tours from 2011.