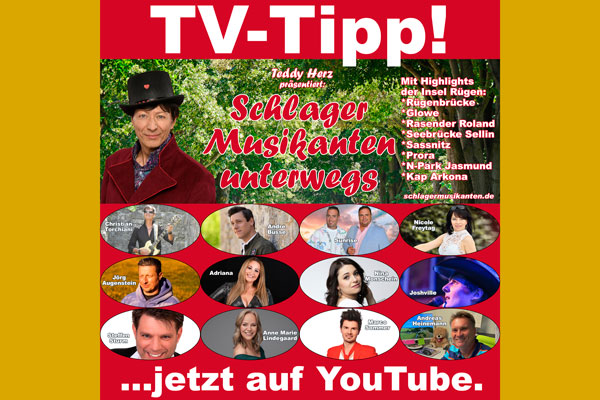 In episode 3 of the popular music show "Schlager Musikanten unterwegs", this time the entertainer Teddy Herz presents sights of the Baltic Sea Island of Ruegen and again welcomes popular Schlager stars with their songs.

The program is broadcast on Schlager Musikanten TV since Sunday, July 3, 2022.

Be there when it goes over the longest bridge in Germany, the over 4 kilometers long "Ruegenbruecke". By the way, you can see the longest sandy beach on the Island of Ruegen in the fishing village of Glowe.

All fans of steam locomotives are surely familiar with him - the "Rasende Roland", the trademark of Ruegen. For Teddy Herz himself, a childhood dream comes true: the ride in the engine cab together with engine driver Achim and stoker Tobias on the route from Sellin to Binz, during which, among other things, the much-visited Granitz hunting lodge is passed.

Since 1998 the historic "Seebruecke Sellin" with its restaurant and the diving bell shines again in the splendor of the original pier of 1927 and is an attraction for many tourists from all over the world.

In Sassnitz, Teddy Herz visits the "Praxis mit Meerblick" of the popular TV doctor Nora Kaminski and takes a detour to the harbor and the old town.

Learn more about the memorable history of Prora, where 20,000 people were supposed to vacation at the same time as part of the "Kraft durch Freude" (KdF) program. Instead, it became a Red Army and National People's Army barracks, and the listed buildings have been converted for hotels and apartments since 2004. Parts of it are currently still an El Dorado for photo enthusiasts and "lost places" fans.

The Jasmund National Park is the smallest National Park in Germany with the probably most famous chalk cliff "Koenigsstuhl", its visitor center and the rustic old beech forests, which have even been ennobled by UNESCO as a world heritage site.

As a further highlight and crowning conclusion of the program, the lighthouse fan Teddy Herz will of course visit Cape Arkona, where there is much more than just a lighthouse to see and explore. Everything worth knowing about the Cape Arkona reports first hand Andreas Heinemann, managing director of the tourism company Cape Arkona, which stamps Teddy's lighthouse passport in the own registry office and at the end as "star of the transmission" naturally the original "Teddy Herz teddy bear" is presented.

The 3rd episode of the music show was also produced by Reuthers Media with the proven team Alexander Roth and Anna-Maria Sander (editing), Adelheid Reuther (direction) and Marcus Reuther (camera and drone pilot).