Dubai makes you think of skyscrapers in Dubai-City. Yet the small peninsula in the Persian Gulf has far more to offer than its Skyline and the famous Emirates Tower (of which the higher one is more than 354 meters high). Dubai – is also the deep blue gulf and the never ending desert. Here you will find spice markets, which give us the feeling to be placed back in time, right next to a pulsating city life. In Dubai, orient and occident seem to fuse, and so it's no surprise to few that in the car city Dubai (over a million registered vehicles) dream motorbikes are shown on the occasion of the Gulf Bike Week: 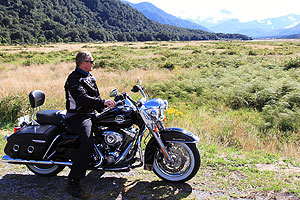 This takes place from the 18th until 20th of October and should attract motorcycle enthusiasts from the whole world into the country. Of course Reuthers Motorcycle Tours, a Division of REUTHER-ENTERTAINMENTS, the top organizer for worldwide motorcycle tours has its own booth on-site. It (Booth L122) can be found right where it belongs, exactly next to the Harley-Davidson booth. After all customers will find in Reuthers Motorcycle Tours the officially authorized Harley-Davidson tour operator with brand new models that are maintained optimally. President Hermann Reuther, also an enthused Harley-Davidson rider, knows just how tours can be fun and will be on location (this already is a tradition) just for the fair.

The Gulf Bike Week opens starting Thursday the 18th of October, from 2 p.m to 7 p.m, as well as Friday from 12 p.m to 7 p.m and again on Saturday from 12 p.m to 6 p.m. A visit to Reuthers can be especially rewarding. After all, the Hermann Reuther and his team have come up, especially for Dubai, with some great attractions and many highlights. For example you can win a Harley-Davidson leather jacket and also the new interactive Motorcycle Tour eCatalog 2013/2014 with 148 pages will be presented. This should be reason enough to visit.

Furthermore those who sign up at fair for the newsletter will receive a 10 percent fair discount on all tours. Now isn't that a fantastic deal?!

Those who want to get a feeling of freedom and take measure what adventures await him should also head for the Reuthers Road Show "Around the world on a Harley" with videos and fantastic pictures (caution, "Danger of Addiction"!) at the popular Bikers Cafe in Dubai on Saturday, 20th of October at 9am...