With the Harley through the country of our Forefathers:
Reuthers Motorcycle Tours on the tracks of European ancestors

Lorna’s face lights up with a smile. She has reached the goal of her dreams. The majestic peaks of Austria’s highest mountain, the Großglockner rises before her. At a height of almost 3800 meters its snowy white fields sparkle in the sun. Before it the Pasterze spreads out, with 9 kilometers it is the longest glacier in the country. Its furrows and ice columns are impressive. Fifty kilometers of high alpine roads and a unique mountain world lie behind Lorna. The 36 curves on the Harley together with her husband Noel were pure pleasure. This is what Lorna hoped for on her trip to the home country of her ancestors. They came from Europe and emigrated many decades ago. Now with the Alps and Lakes Tour from Reuthers Motorcycle Tours, Lorna’s long cherished dream has come true to visit the country of her ancestors, as well as for many other participants from the New World. 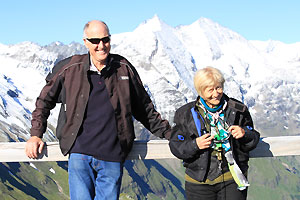 „All participants of the first Alps and Lakes Tour in 2011 had ancestors in Europe." says Hermann Reuther, founder and president of REUTHER-ENTERTAINMENTS, authorized Harley-Davidson tour operator. The tour starts in Munich, the cosmopolitan city with a heart, world-famous for its Oktoberfest, on to Salzburg, the city in which the beautiful melodies from Wolfgang Amadeus Mozart were composed, into the grand mountain world of the Alps. Of course a visit to the castle Neuschwanstein also belongs to the program, the legendary fairy tale castle of the Bavarian King Ludwig.

For a few years now Reuthers has been offering premium motorcycle tours to Americans, Canadians, New Zealanders and Australians who have their roots in Europe. Millions of Europeans between the 17th and the 20th century left Europe in search of a new fortune in the New World. They wanted a new and better life. Today 3 out of 4 Americans have ancestors from Europe. "Many of them wish for nothing more, than to see their home country and to experience where their grandfather and ancestors lived, and we can fulfill this wish for them", says Hermann Reuther who offers six different Europe trips. Besides riding on a motorcycle, these tours are also possible in an escort vehicle or in a mini bus.

Among the emigrants were more than 3 million Irish. Their descendants can extensively explore the country of their forefathers on an 8-day motorcycle tour and so the Ireland road trip leads through Ireland past old Viking cities, across breathtaking passes and along the Atlantic coast, then of course to the Heritage Center in Cork, which in the earlier days was called Queenstown. Here the Irish started off into the New World with their hopes and dreams.

In September 2012 there is a real premiere: "Bella Italia" takes exile Italians and Italy fans into the country of excellent cuisine, through various landscapes and past a thousand years of culture. Tuscany lovers can just book the 6 day Tuscany tour, which starts in Florence, the city of Michelangelo, Leonardo de Vinci or Galileo Galilee.

„To trace the footsteps of one’s ancestors on a Harley-Davidson motorcycle, this is simply a dream", states Hermann Reuther. Lorna, with the German maiden name Bauer, brings it straight to the point: "It simply was a wonderful trip", says the Australian as she gets off the Harley in Munich after the Alps and Lakes Tour.